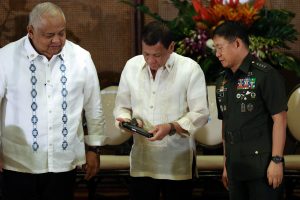 President Rodrigo Roa Duterte inspects one of the Armscor TAC Ultra FS .45 caliber pistols which he distributed to the Armed Forces of the Philippines (AFP) during a ceremonial turnover at the Heroes Hall of Malacañan Palace on July 18, 2017. Receiving the pistols is AFP Chief of Staff General Eduardo Año. Also in the photo is Executive Secretary Salvador Medialdea.