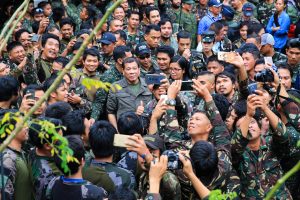 During his visit, he provided the soldiers in the forefront of the fight against the rebels in Marawi City with groceries and watches. He also checked the condition of the wounded troops.

The President then told the troops to remain steadfast as they are about to win the war against the terrorists who laid siege in Marawi City. He also reiterated his assurance to the soldiers that he will establish a P50-billion trust fund from where the education expense for their children will be sourced. He also added that he will also procure sidearms for the soldiers.