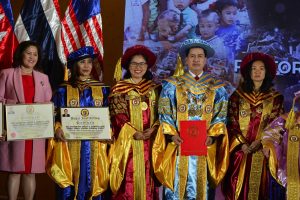 Aside from being the executive Pastor, chairman, and Chief Executive Officer of the Kingdom of Jesus Christ, Pastor Apollo is also the Founding President of Jose Maria College, and ACQ-College of Ministries.

The ceremony was attended by the Chancellors of both the Royal Institution Singapore and the Royal Institution Philippines, and their honorary fellows, who are also the finest in their fields of expertise, and delegations from The Kingdom of Jesus Christ and Jose Maria College and special guests.

Theme: Inter-Religious Cooperation as a Global Platform for Universal Peace

The global membership and accrediting organization saw Pastor Apollo’s noble, and boundless initiatives in the field of education, environment, philanthropy, and his outstanding management skills in handling the more than 7 million members of his congregation on top of his social and humanitarian undertakings.

The good Pastor was also conferred with the highest title and awards of doctorate degrees.

After which, Pastor Apollo has delivered his acceptance speech in which he highlighted the essence of the theme: Inter-Religious Cooperation as a Global Platform for Universal Peace.

“It is upon the foregoing rational, that I accept with utmost gratitude indeed from the bottom of my heart. I am quiet thankful for this timely recognition as this truly made sense of our glorious but sacrificial past in the Kingdom,” Pastor Apollo said.

“The theme “Inter-Religious Cooperation as a Global Platform for Universal Peace”, the review of the basic concepts must be in order to place everything in proper prospective.

Indeed, peace and harmony, if not cooperation, between and among religions provides a good foundation for universal peace,” he added.

The good Pastor also stressed in his speech before a multifarious audience last week in Davao City, that peace comes from the word Anglo-French “PES” and Old-French “PAIS” meaning peace, reconciliation, silence, agreement.

“What I learn however interestingly is that “Shalom” is actually cognate with the Arabic word “Salam” which happen to be a Muslim greeting which literally means peace. Hence, in pool, we always hear our Muslim brothers greets another Muslim “Assalamualaikum” which means “Peace be upon you,” he added.

The good Pastor also stressed that “there is even congruence in the definition of peace between the Jewish greeting of “Shalom” and with the Islamic greeting of “Salam”, thereby, implying that this may not be accidental but reflective of the innate call of all religions to aspire for peace and abhor violence.”

Pastor Apollo also took his oath before Fellow Dr. John Magno, who is the former Chief of the Department of Education in the Autonomous Region in Muslim Mindanao.

But the giving of highest awards and titles to Pastor Apollo did not end there, because he was also declared as the pioneer ambassador of global peace for spearheading peace initiatives summit transcending racial, national, and international religious barriers, highlighting inter-religious cooperation as a Global Platform for Universal Peace.

Meanwhile, in its website, the Royal Institute of Singapore says it recognizes the experiences, contributions, skills, talents and achievements of all individuals who deserve recognition and confers membership for global recognition.