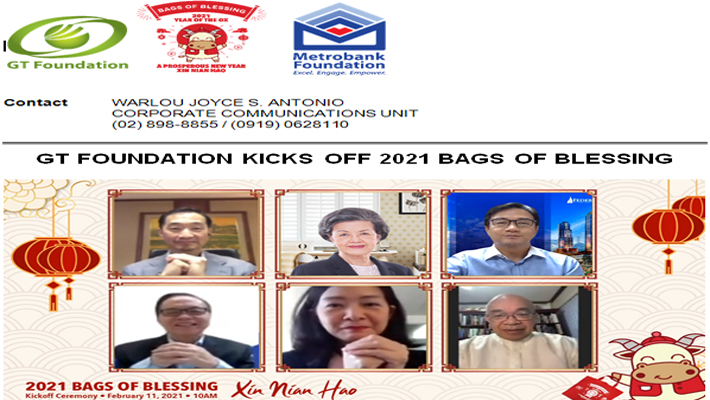 As part of its Chinese New Year celebrations, the GT Foundation, Inc. (GTFI), together with Metrobank Foundation, Inc. (MBFI), virtually kicked off their gift-giving tradition called ‘Bags of Blessing’ on February 11, 2021.

In partnership with the National Secretariat for Social Action (NASSA)/Caritas Philippines, through the assistance of select Metrobank branches, 18,000 families from 33 sites and 3 sectors will receive food packages by presenting their issued vouchers in identified supermarkets from February 12 to February 26. The priority beneficiaries chosen this year are families whose source of living and income was affected by the ongoing pandemic, survivors of recent natural calamities, members of indigenous peoples (IPs) tribes, and selected teachers, soldiers, and police officers.

“Today marks yet another milestone for us at the GT Foundation as we embark to widen the reach of the Bags of Blessing targeting an increased number of beneficiaries, from the usual 10,000 families to 18,000 families in 33 sites this time,” shared GTFI president Alfred V. Ty. “The sharing of Bags of Blessing is not only about gift-giving and keeping Chinese traditions alive but also to contribute to the national goal to curb hunger. Through our little contribution, we aim to bring food to the tables for the nutritional needs of the average Filipino earner,” he added.

“Nang nabalitaan ko na isa ako sa makakatanggap ng Bags of Blessing, labis akong nagalak kasi sa panahon ngayon napakahirap nang maghanap ng trabaho, Ngayong nahinto ako sa pagtatrabaho, malaking tulong ito para sa pamilya ko (When I heard that I will be one of the recipients of the Bags of Blessing, I was filled with joy since it’s difficult to find a job during this period. Now that I’ve stopped working, this is a big help for my family),” said Reynaldo Baria, a beneficiary from Iloilo City.

To this, MBFI president Aniceto Sobrepeña cites the jubilee year for Christianity in the country, the theme of which reflects the Bags of Blessings’ aspiration. “This year, we’re commemorating the 500th year of Christianity in the Philippines with the theme, “Gifted to Give.” Bags of Blessing is the brainchild of the late Metrobank Group founder and chairman Dr. George Ty Siao Kian. It is inspired by the traditional ang pao, a red envelope containing cash used to deliver best wishes and luck. Instead of cash-giving, specially designed red bags containing P1,000 worth of grocery items are distributed to indigent families. Bags of Blessing carries the same message: that the language of giving transcends differences and prevails even over tough situations,” he said.

Since its inception in 2009, the GT Foundation, Inc. (GTFI) has pursued the philanthropic initiatives of Dr. George S.K. Ty and his family. It has done so by investing in strategic development programs that empower communities, primarily in the areas of education, health, and calamity assistance. In 2018, GTFI continued to support interventions that contribute towards sustainable progress of the nation as a whole.