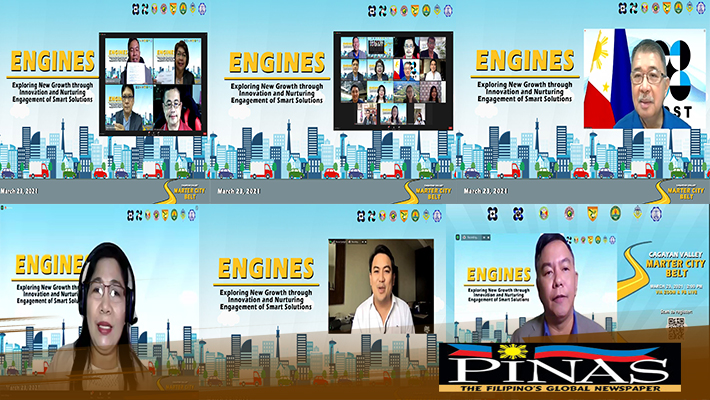 THE launch of the Cagayan Valley Smarter City Belt led by the Dept. of Science and Technology (DOST) last Tuesday, March 23,  was a big success.

With the theme “Exploring New Growth through Innovation and Nurturing Engagement of Smart Solutions,” (ENGINES),  the Cagayan Valley in Region 2 will now embrace progress and improvements with the launch of the project, headed by DOST Region 2 Director Engr. Sancho Mabborang. Although presented virtually, Region 2’s local executives and LGUs attended  the event.

“If we all work together in nurturing Cagayan Valley, it is possible to make every city in the region, a smart city,” Mabborang said, “although achieving the vision is not easy, but it is possible.”

It aims that the belt and road in the region will be interconnected. With this, Mabborang said, they hope to create a synergy and collaboration between smaller and bigger cities, municipalities as well as provinces in the region. Further, it wants every city to be “future-ready” through latest technologies and innovations coming from the state colleges, universities and higher education institutions as well and from the research and development centers in the region.

Mabborang cited Cauayan City of Isabela, as the prime mover of science in Region 2. He also quoted Henry Ford of Ford Motors who said that “if everyone is moving forward together, then success takes care of itself.”

The DOST director said the project is first in the region. Included in the smarter city belt are the cities of Cauayan, Tuguegarao, Ilagan, Santiago, Bayombong, Solno, Maddela, Diffun, Cobbaruguis, Lalo and Basco in Batanes.

Smarter cities, according to DOST secretary, Prof. Fortunato T. Dela Pena, are those utilizing the technologies developed by DOST, also by the local government. It was in 2015, he recalled, when Cauayan Isabela was declared the first smart city in Region 2.

Kok-Chin Tai, chairman of Smart Cities Network of Singapore, also declared his message of support to the Cagayan Valley Smarter City Belt launch. He looks forward that the program becomes “a catalyst for international collaborations with our ASEAN neighbors.”

He expressed concern on the Philippines being the most exposed country in Southeast Asia in terms of disasters. “I hope that I will work with the Cagayan Valley Smarter City Belt initiative become the pioneer of technology as solutions to disaster preparedness,” Tai said. He congratulated DOST for a “visionary effort to bring the cities to level up, not only to help the cities but to improve the living condition of the people, to minimize the impact of climate change, typhoon, storms.”

On the other hand, Cagayan 3rd District Representative, Joseph Lara, for his part said, he commits himself to fully support the turning of Cagayan Valley into a smarter city belt. “For whatever funding that will sustain the Cagayan Valley Smarter City Belt, I assure you of my support and you can count on me to back up its necessary funding,” he said.

So far, there are three cities now considered “smarter cities” – Cauayan, Tuguegarao and Santiago while the others are on their way for inclusion in the list.