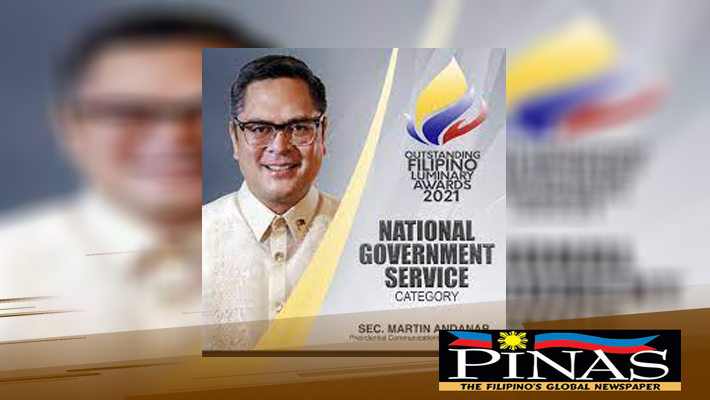 This year’s Outstanding Filipino Luminary Award bears the theme “Inspiring the Filipino people amidst the pandemic”, which honors and highlights the valuable contribution of the leaders, the civic movers, and innovators that have propelled the country’s economy and inspired their fellowmen during this pandemic.

Secretary Andanar on Friday expressed his gratitude for the award given to him.

“I am humbled by the recognition that the Episcom group has given for the works that my department and I have worked for in order to serve and inform the Filipino people,” he said.

“This is another opportunity that I will be sharing with my PCOO family who has been as enthusiastic in attaining such overwhelming improvement in government media in the past 5 years. Thank you very much,” he added.

According to the group, Secretary Andanar was given the award “for being the catalyst of effective media through his current undertaking as the Head of PCOO.”

“His clear-cut approach in communicating the real status of the whole-of-government programs and efforts have bridged the information gap between the Filipino people and its civil servants,” the award-giving body said in its official social media page on Thursday.

Shortly after his assumption into public office, Secretary Andanar championed the institutionalization of the Freedom of Information through Executive Order No. 2 signed by the President in September 2016.

Among other game-changing initiatives he also spearheaded was the creation of the national communications policy that harmonized government media operations and messaging. The said policy also birthed the Laging Handa Crisis Communication that is now being extensively used amid the pandemic.

Along with PCOO Undersecretary Joel Egco, they pushed for the welfare of the media which created the  Presidential Task Force on Media Security.

The awarding ceremony will be at the Conrad Manila Hotel on September 24, 2021.

Secretary Andanar will be joining fellow awardee and public servant PDEA Director General Usec. Wilkins M Villanueva, who was cited as the leader who championed the implementation of the Barangay Drug Clearing Program (BDCP), the main framework of the agency’s anti-drug strategy.