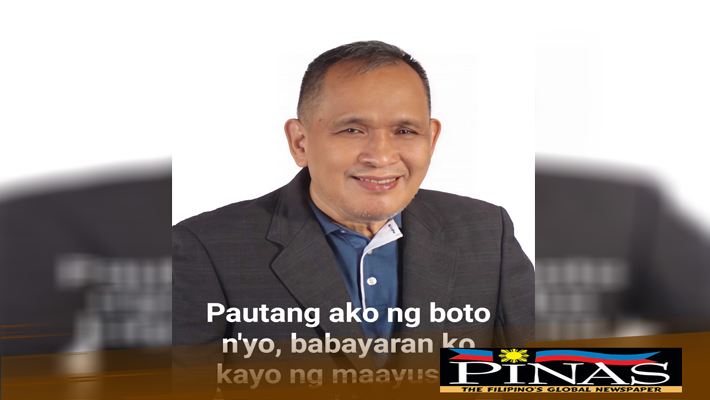 IF people want deserving public servants, they should not sell their votes, a congressional candidate is telling voters in his district in Leyte.

Atty. Alberto ‘Abet’ Narido Hidalgo, 63, is running for Congress in Leyte’s 2nd district. He lamented that many voters in the province allegedly sell their votes to as much as P5k per head. It is now one of his advocacies to remind the electorate not to sell their votes, following his 5th attempt to run as representative of the province’s 2nd district which is comprised of  Barugo, Burauen, Capoocan, Carigara, Dagami, Dulag, Julita, La Paz, McArthur, Mayorga, Pastrana, Tabontabon and Tunga.

Hidalgo has been an active private law practitioner for almost 36 years and some of his stints in the government service include being the chief legal counsel of the Laguna Lake Development Authority (LLDA) as trial attorney IV, where his team won two landmark decisions before the Supreme Court on protection of the environment and administrative law in LLDA vs. Court of Appeals and the City Government of Caloocan et AL and LLDA  vs.  Court of Appeals and consolidated cases.

If he makes it this May elections, foremost in Hidalgo’s program of government are the farmers, who should benefit from the government’s programs. “If I win, I’ll move for the review if rice tariffication law. Do we need to abolish this or add more provisions?” the candidate for Congress said. He would also strengthen the farmers’ cooperatives in the province, for the latter to avail of loans with low interest.

He disclosed that loans extended by rich families to poor farmers bear high interests, thus turning the field workers poorer. He lamented that farmers fail to avail of loans from banks like Land Bank with only two percent interest per annum, because such are only made available to rich traders.

Currently, there is supposedly P120-billion fund from the Philippine Coconut Authority (PCA) for the farmers but Hidalgo doubts if this can go to the target beneficiaries.

Another project he wants to pursue for the sake of farmers is tuba production. Tuba is a wine made from the coconut sap. This can generate income for the farmers.

Another platform of govt. he wants is to push for the continued construction of road infrastructures, many of which have been discontinued. “Ito ang madalas na dahilan ng aksidente sa kalsada,” he said.

The third platform of governance that Hidalgo wants to put in place is to “amend” the Omnibus Election Code regarding the multi-party system, where there will only be two parties to vie for the presidential and vice presidential positions.

He proposed that the different parties form alliances to establish only one party. Then hold party conventions and select among party members who will represent the party. ”In this way, vote buying and possible creation of political dynasty can be avoided,” Hidalgo stressed.

To date, he noted that there’s no law stopping anyone from running for a position.

This supposedly caused the Philippines to be the laughingstock of other countries. The Philippine political system should change, the lawyer added. The candidate likewise dreams for the federal form of government for the Filipinos, where each region will be given autonomy in some aspects.

To address the pandemic or Covid-19, Hidalgo wishes to build a center for disease control to conduct studies on various viruses. There should also be state-sponsored vaccine manufacturing. ”We should be forward-thinking at hindi ‘yong kelan may problema, saka lang aayusin,” he said.

For the education sector, Hidalgo said he would push for teachers’ training to be conducted in school during summer. Upgrading of skills should be done in school, Hidalgo explained, saying that assessment should also be done following the training.

This president of the Integrated Bar of the Philippines IBP), Leyte chapter, said that most politicians cannot give specific platforms because political parties lack communications among themselves. This he wants to change.