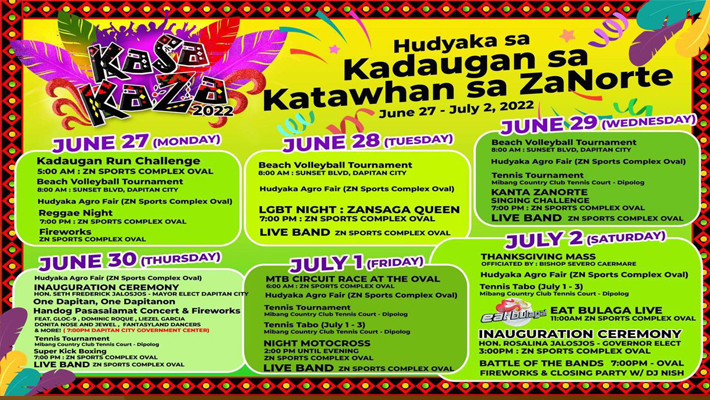 The biggest event in the Province of ZaNorte will happen on June 27 to July 3, 2022. Dubbed as “Kasa Kaza”, this festival is a prelude to the comeback of the bigger Hudyaka ZaNorte Festival in May 2023. It may be remembered that Hudyaka, adjudged as the second best provincial festival by the Association of Tourism Officers of the Philippines, was replaced by a mediocre Saulog Festival because of politics. For 9 years, the people of ZaNorte craved for a truly festive founding anniversary celebration. And now Hudyaka is back at the ZaNOrte Sports Complex!!!!!

The weeklong celebration will wake people up early in the morning by a roving truck with tribal drummers on board, roaming around the streets of Dapitan, Dipolog and major towns.

Crowd drawing and spectator sporting events are lined up. They are as follows:

June 27…..Kadaugan Run….a marathon competition, which is expected to be participated by 500 runners

June 30….Kickboxing competition at the ZaNorte Sports Complex open ground. 10 matches will entertain the crowd with no admission fees.

July 1….Mountainbike Circuit Race at the Motocross Race Track inside the complex. To be followed by the biggest Motocross event of the year, which extends up to evening for a rare night race event. The said events are paired with Tattoo Competition at the same site. Plus: the sound of roaring bike engines will be backed by 10 local underground bands playing progressive rock and metal. FREE ADMISSION.

Every single day and night is a must-visit by families, barkadas and lovers at the complex… There are food stalls that open to serve lunch, dinner and iced cold beers. They will be manned by small entrepreneurs and the food are carenderia priced. Agro-fair games and raffle draws happen daily at the HUdyaka site.

There will be fireworks show on June 27 and July 2 at the complex. On June 30, another fireworks show will be fired in Dapitan City to cap the free concert at the Dapitan City Hall by local bands, Donita Nose and Jewel, Dominique Roque, Hero and Gloc 9. Free bus rides await those who wish to avail from Dipolog and some points of the province.

Nightly shows at the complex will start at 7pm:

June 30….Mega show in Dapitan with Gloc 9 and more

Every night will be culminated by local bands who will be entertaining every revelers from 10pm hanggang sawa.

The weeklong celebration will be highlighted by a Subanen themed oath taking ceremony of Gov. Nene Jalosjos on July 2, who always maintained that her victory in the last election is not her victory…but the victory of all ZaNOrtehanons who are finally emancipated form the bondage of 9 years tyranny and monopoly. Subanen’s Buklog festival will follow.

The ceremony will be preceded by the Eat Bulaga Live Show form 1130 to 230pm at the outdoor Hudyaka stage. Bossing Vic, Joey and the entire cast will grace the show.

On top of all these, the Philippine National Police and the Philippine Army, in cooperation with volunteer groups are ever ready with a comprehensive security plan… Hundreds of personnel will be deployed to ensure that the entire week will be remembered as a festive and seamless celebration.