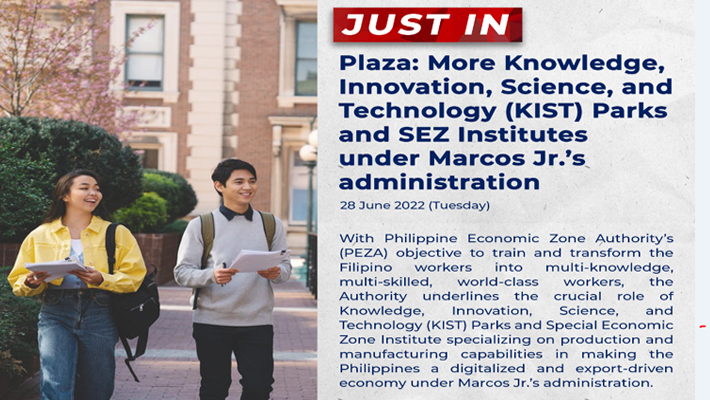 PEZA Director General Charito B. Plaza highlighted, “Our KIST Parks is a type of an ecozone located within the campuses of State Colleges and Universities (SUCs). The goal of KIST parks is to leverage engineering and other much-needed courses required by various industries. It means we facilitate or ensure that the skills and jobs needed by industries are matched to those offered by these academes.”

“With this, PEZA welcomed BatStateU as the Philippines’ first-ever Knowledge, Innovation, Science and Technology (KIST) Park and we hope for their success as a benchmark for the whole country,” the PEZA Director General added.

Further, the De La Salle University, Don Mariano Marcos State University, and the University of Perpetual Help are also among the private universities proclaimed and will soon start their operations as KIST Parks. Meanwhile, the Catanduanes State University is now approved by the PEZA Board as a KIST Park last October 2021 and is currently waiting for its Presidential Proclamation.

With these signed MOUs, these universities will provide progressive leadership in applied research, developmental studies in technical, industrial, and technological fields, and production using indigenous materials and effective technology transfer in the countryside.

PEZA Director General Plaza said, “KIST Parks will enable universities to partner with foreign universities to bringing their degree programs, skills training, and technology to their local KIST partners, hoping to attract foreign students and make the Philippines not just an investment destination but also as an education hub of Asia.” #