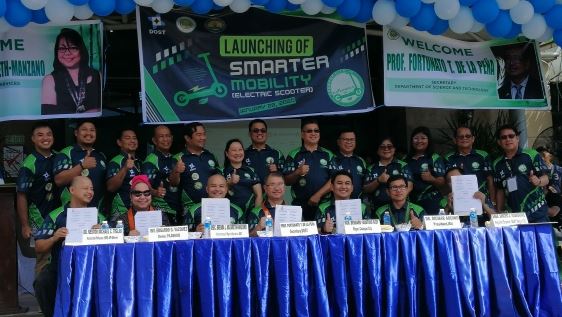 The Department of Science and Technology (DOST) has recently turned over seven electric scooters (e-scooters) to the Cauayan City government in Isabela for pilot testing.

DOST Secretary Fortunato de la Peña said the e-scooter project also aims to empower the city’s tourism services aside from being a cleaner mode of transportation. He emphasized the importance of strong partnership among DOST and its key partners to help make the project viable, and development possible.

“This simply proves that cooperation among partner agencies — the Local Government of Cauayan City, Isabela State University, DOST Region 2, and the University of the Philippines – many significant things can be achieved,” dela Pena said in Tagalog during the turn-over.

“One of the major challenges we are currently facing is climate change. Excessive carbon dioxide (CO2) emissions from motor vehicles further accelerate this problem, and most people have also accustomed themselves to traveling short distance using cars. Therefore, introducing cleaner modes of transport is necessary to reduce our carbon footprint,” he added.

According to one of the members of the team that developed the Smarter Mobility technology, the e-scooters use Global Positioning System (GPS) technology which tracks down all the units within an established jurisdiction called “Geofence,” to prevent them from being stolen. The scooters were first tested within the UP Diliman grounds and can be controlled using an app.

Cauayan City is the first declared Smarter City in the Philippines. The Smarter City Program  recognizes the use of science and technology to efficiently provide basic services to the people. It has contributed significantly to the attainment of Goal 11 of the United Nations Sustainability Goals. ### By Enrico Belga Jr./PAPI Secretariat